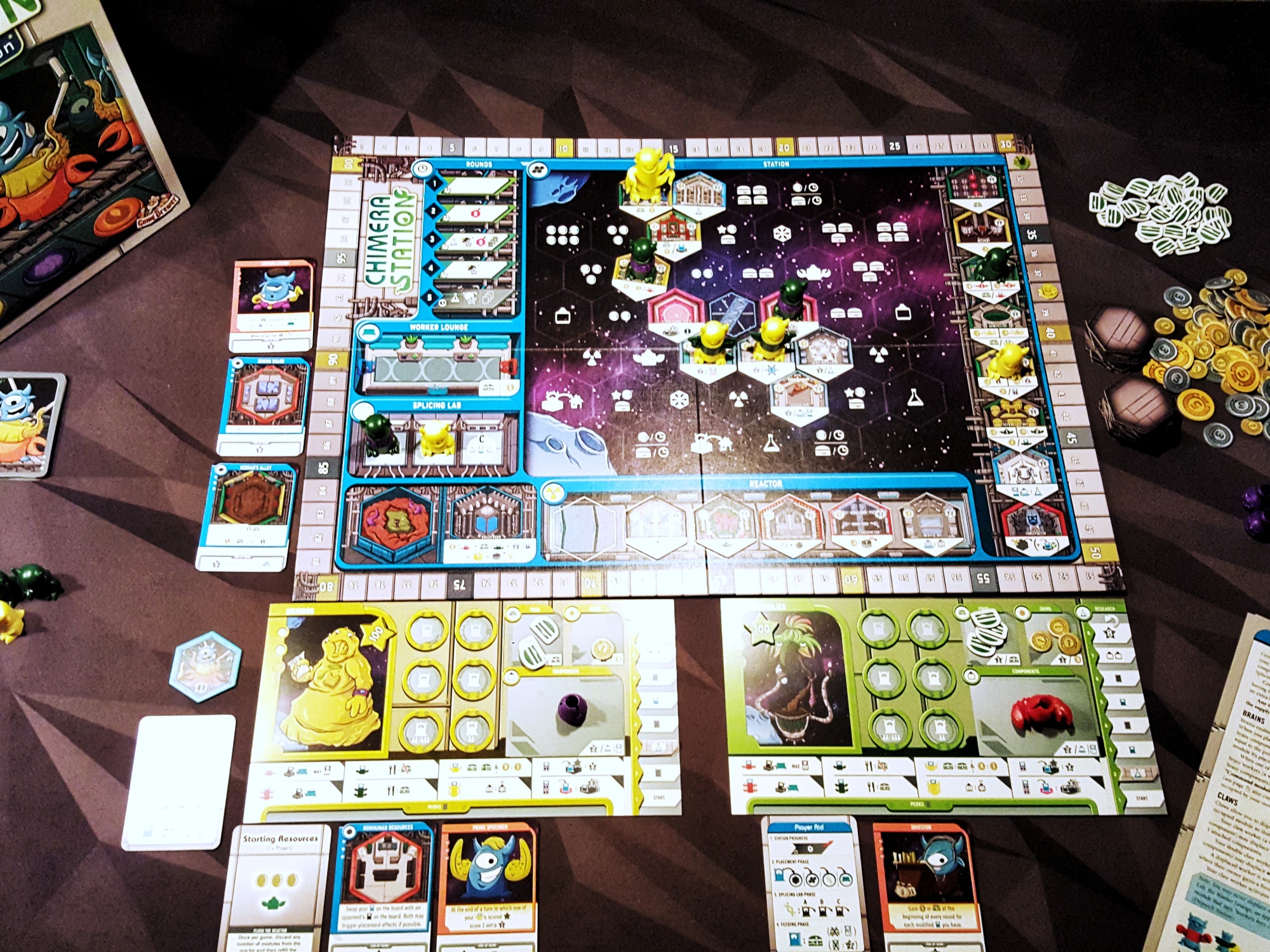 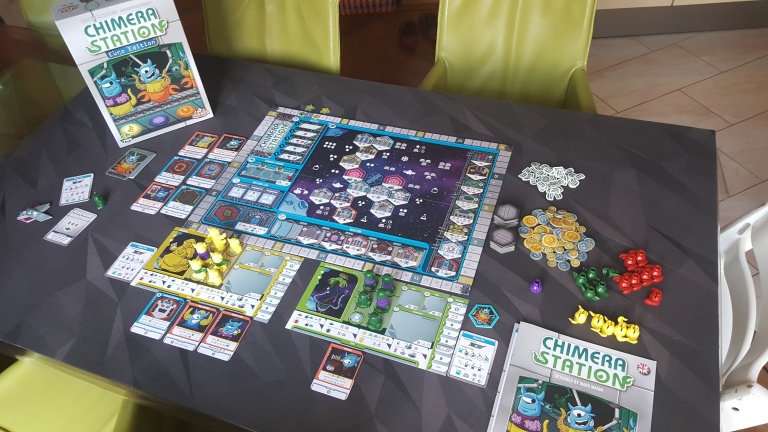 So you are here to listen to why Alien splicing is the next best thing after sliced bread? Because, in all honesty, it is a freaking amazing way to make workerplacement cool again. When we saw Rahdo’s video on it a while back, with those Lego’s instead of the fancy ones in the retail version, we were sceptical if this was going to a playable thing or just a gimmick to stand out. We can say it is both!

If you only would judge this book by its cover you would say it a whimsical and entry-level euro game. But looks are deceiving in this case, Chimera Station is a medium-weight board game which has some crunchy decisions to it. With only 5 rounds and between 20 – 30 actions, you will need to make the most out of it too become the most successful Alien race out there. Because yes dear readers, they are out there! Watch this proof picture and be the judge of that.

Another big plus for the game is its variability it brings. The game comes with a set of different races and you can pick the standard side where they are all the same or the B side where they have their own strengths. For a first game the A side is fine, but we would recommend the B side after that, to spice things up. There are perk cards which will give you the possibility to acquire passive and active powers besides the ones on the board. Most are rulebreakers, point generators or action spots you can visit when the ones on the board are taking. They will come out differently every game, so not one game will have the same combinations with the way the Modules come out. The modules are the meat of the game in combination with the customizable workers and is the way the space station will build out on the board. Tasty Minstrel Games wasn’t underselling it by stating this on the boardgamegeek entry:

Featuring a grand total of 12 standard action spaces and 40 additional ones (modules), 22 perks, 16 different ways to configure your aliens (via components), and 4 different races, the possibilities are endless!

Aren’t there any downsides then? Because so much combinations may lead to AP players getting stuck or a lot of rulebook checking? Yes, it does have a little of that, we can’t deny that, but TMG did a solid job on the rulebook, the graphical design is very clear and including an extra player aid explaining all the perk cards and modules is a smart choice they made. After a few plays most players will know what the spiffy choices are and you want to combo with your strategy. So it’s a minor quibble, but still one to keep in mind here if you are less interested in looking for the best possible combinations. You don’t have to play it that way and can take it as it comes along, so a more tactical way of playing is fun too.

So we began by saying the splicing was the coolest thing right? It for sure is! Look how cool they are and they are dang functional too. Brains will give you points, Claws will bump people out of taken action spots, Leaves will feed the Aliens and Tentacles will gross you extra stuff like money and food. If you double dutch them, their powers increase and they become even more awesome. There are only 7 of each, so in a 4 player game you will have to watch out to not get stuck without the ones you need. To customize your workers so specifically is something clever, something unique and will leave you wanting this in a lot more games. Designer Mark Major must be a  smart chap, because he introduced, or made a gimmick looking feature, almost an industry standard. Who wants a regular boring worker anymore in his workerplacement games?

The criteria on which we base most of our opinions, but isn’t the end all and be all.

Does it play good with 2?
It does play very well with two. The scaling is done with the amount of starting workers you receive. The playtime is around 60-75 minutes with two. A perfect time for weeknight gaming.

Does it suit one of our game groups (D&D, Heavy games, thematic games, etc.) or can I bring non gamers in or take it to others? We haven’t played it 2+ yet, but we expect that it will have a little more interaction a.k.a. blocking & bumping with more players around the table. May introduce a little more randomness also. Is it thematic? Hell yeah it is. So gamers who prefer theme first aren’t disappointed. Okay, most of the buildings are based on hilarious representation of our human assumptions, but who doesn’t like all the fun stuff on while game? Non-gamers can be a little more tricky due to the amount of possibilities and ways you can  go. But we expect most players will grasp it after a round or 2.

Does it come with a solo variant?
I am not aware there is one and not sure if this game needs one.

How is theme and mechanics tied in together?
Like early, I think it does this part very nicely. Yes it still whimsical and funny, but you do feel like a weird alien trying to build his module the best. Go Weirdo’s!

Does my collection needs this? What stands out?
(New mechanics? better integration of x? new theme? etc.) Do we need another workerplacement? Does it stand out? We would say it does stand out from the average game and does leave us wanting more. The worker building is fantastic and they made an accessible, but still demanding game for a big range of gamers.

And how is the rsp?
We bought this copy against a review price from The Game Brewer (thanks again!) last Essen and it is the regular retail version. There is a Kickstarter Deluxified version, which we would loved to have, but isn’t a necessity either. If we see a RSVP (based on BGG) ranging from 50$ until 99$ we think the latter is far too much. We don’t think it’s OOP and there should be some copies around. So it looks a little on the higher end of the scale and the components do seem to justify a part of that.

So in conclusion, we will need to play it a few more times to make our final judgement on it, but for now we highly recommend this game from Tasty Minstrel (US) and the Game Brewer (Europe). We are really liking this one quite a bit and it will rank high on our favorite workerplacement games list.

The world would be less fun without the possibility to just build your Alien the way you want. Start working and start splicing your Alien friends! (no aliens were harmed during these games and are all happy living together in a galaxy far far away)