John Clowdus and Kolossal Games are going big on this pimped new re-release of the Omen: a Reign of War series. There have been already two iterations of this saga and a lot of expansions of this BGG award nominee game saga since 2011. But we dare to say, this is going to be a big overhaul from the Smallbox editions and is going to be a fantastic line of games which this collaboration between these two publishers is bringing to us!

Let’s dig in and face our enemy 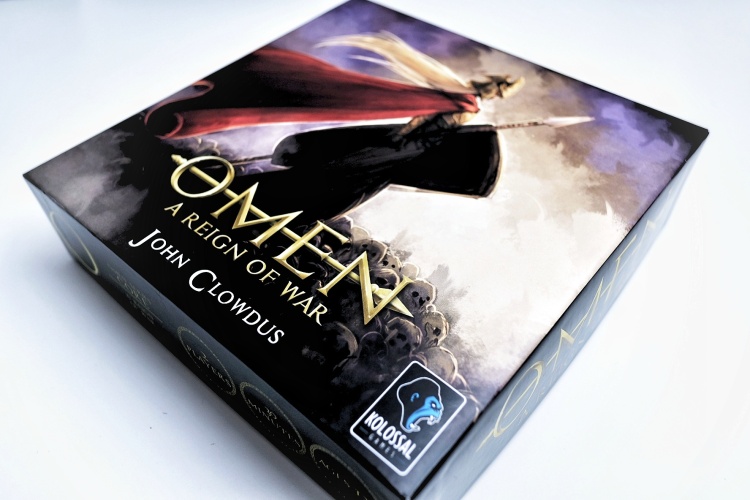 The big elephant in the room here is the F.A.N.T.A.S.T.I.C looking artwork which is even more elaborately showcased in this new edition. While we received a Print & Play preview copy, which is just crazy good looking and done by Print & Play, we are mesmerized by the portrait artwork. A host of artists did a stellar job of capturing the gist of this fantasy time period and they set the tone of the world you are fighting in and with, very well.  But don’t get pulled in too deep, it will cost you…(check here how much 🙂) 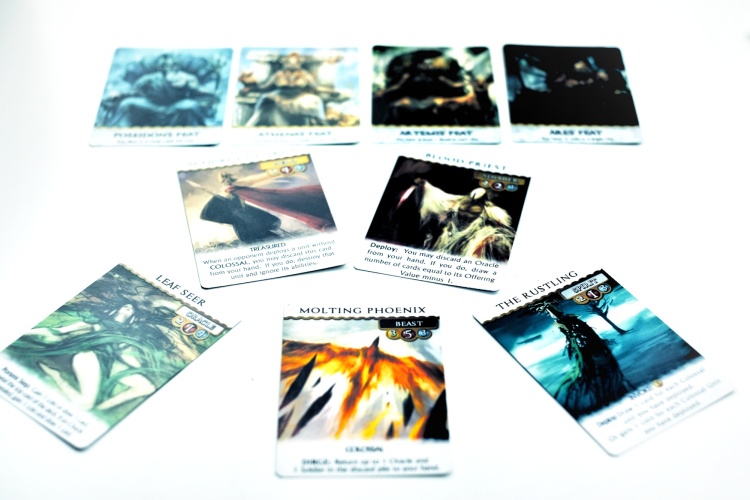 As greedy sons and daughters of Zeus, you will pillage and carnage three cities in Greece for its divine prowess, control of the majority to gain victory points and combining all kinds of different power units at your disposal. 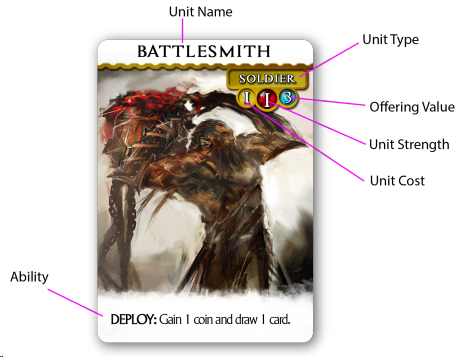 If you ain’t familiar with something like Magic the Gathering or other card-based board games, the cards are set apart with Keywords, which are specific actions a given word has in the game. With a lot more content possibilities in the future, these will give you so much replayability and a different game experience every time you will play one of the Omen Saga products. That premise is something we highly applaud. It can be a little overwhelming in the beginning, but after a few rounds, it makes sense. 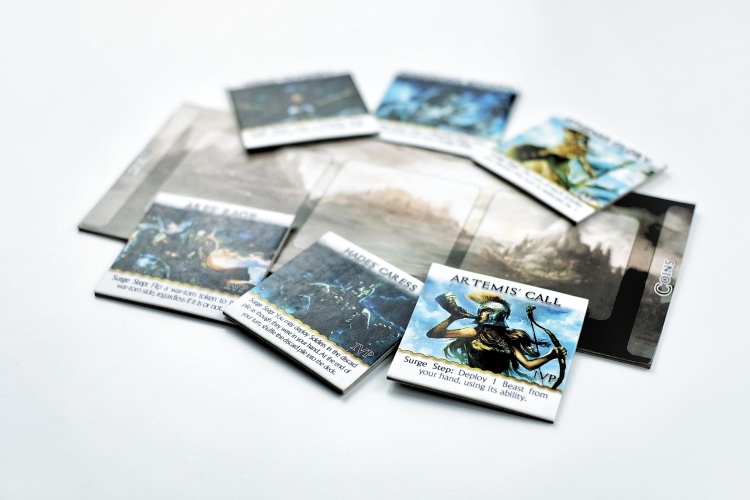 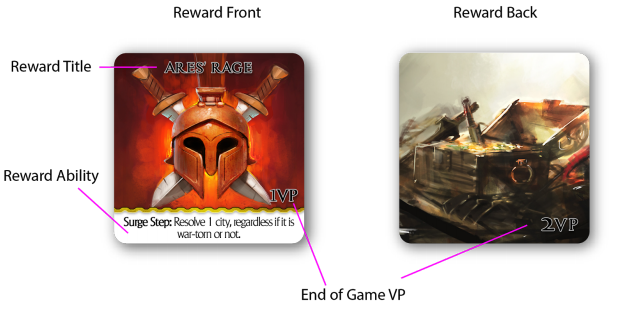 The flow of the game

Already in the base game, there are possibilities to play with some variants. Especially the drafting variants are ones, which when you are more experienced with the cards, you surely want to go to. But the base game, with its central deck (like say 51st State), is one we ourselves love! And who knows? Maybe there will be more unlocked! 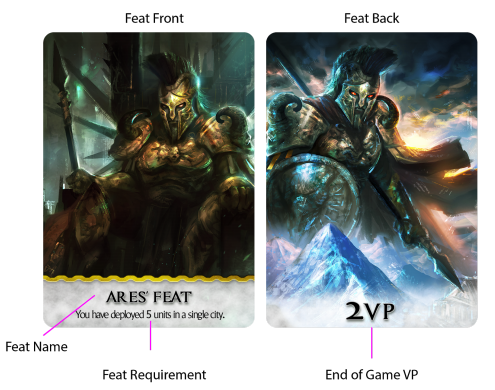 How does this end in the end?

While quite simple, when two out of the three stacks of City Rewards is depleted or when one of the players has achieved five out of the six Feats they have in front of them.

After that, players immediately count up their victory points and the one with the most of those will be receiving the blessing of the Gods. The points are on the reward tiles, through handheld Heroes or those feat cards. 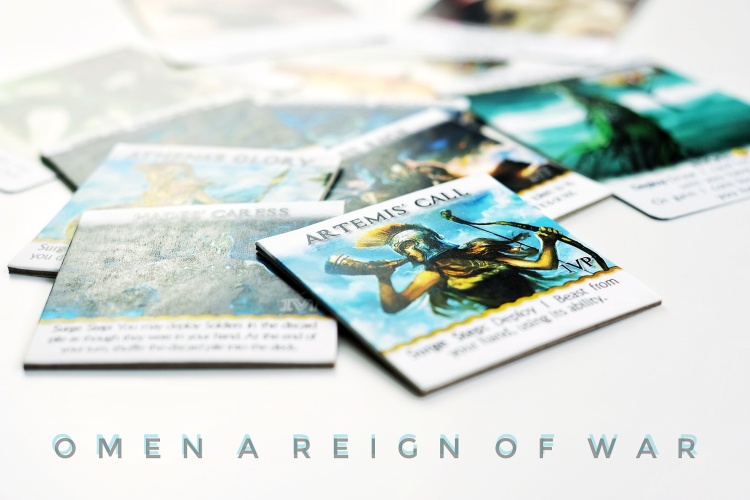 Let’s do this, let’s tell you what we thought after our first play’s of this colossal little card game. We love the contradicting in this, just a small box with a lot of game packed into it. We haven’t played any of the earlier editions so we cannot say how it has changed or compares. But, from the information we got from Kolossal Games, it is mostly just are little revisions, rules tweaks, adding reward tiles and a physical central board. As we got to know Kolossal Games a little better over the last few months, we can advise to follow along with the Kickstarter closely for some surprises and more fun stuff they will have for you all. Their first three projects were amazing and they are all-in to over-delivering on everything they do. They are going to give us a whole bunch of Omen products to explore and aren’t just here for solely the re-print possibilities.

While I myself have played a lot of Magic styled card games in the past, Erna hasn’t. She did need some time to adjust to the Keyword implementation, but I can tell you it is implemented very solidly and she picked up the game very quickly. The variety of units and the coming standalone products will bring a whole Omen Saga to your table and we can imagine us highly liking getting all of these in the end. Due to the easy ruleset and clear flow of the game, it will get you playing very quick. It does take a few rounds to see where the strategy is, but in the end, the base game is a medium to light tactical strategy card game. While we say that, we only played the base game and including more different units, more rewards, more feats, we do see the potential for it to be a more complex game. The system allows for that and that’s a big plus in our opinion. 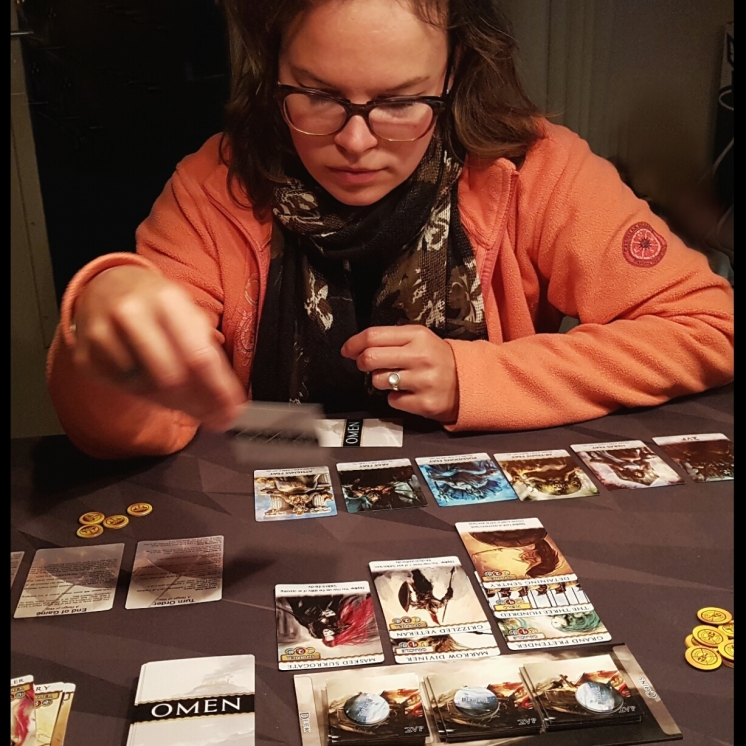 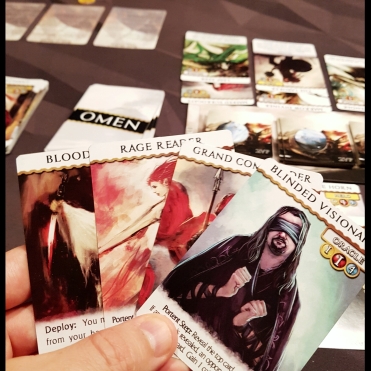 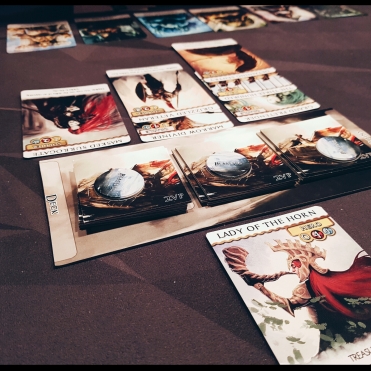 Lowlights (not really though…)

Yes this preview is based on a received preview copy, and yes we are already liking a lot of what Kolossal games are doing lately, but to be honest, they are are just crushing it. And this latest endeavor looks like no exception. We hope this campaign goes over well and will lead to a huge amount of content for the Omen Saga. We did approach this as usual and put it out against our review criteria, but for a longer review, you will need to wait until the full product is available. These are our initial thoughts, based on the current state of the game. (which may change during Kickstarter, who knows.) 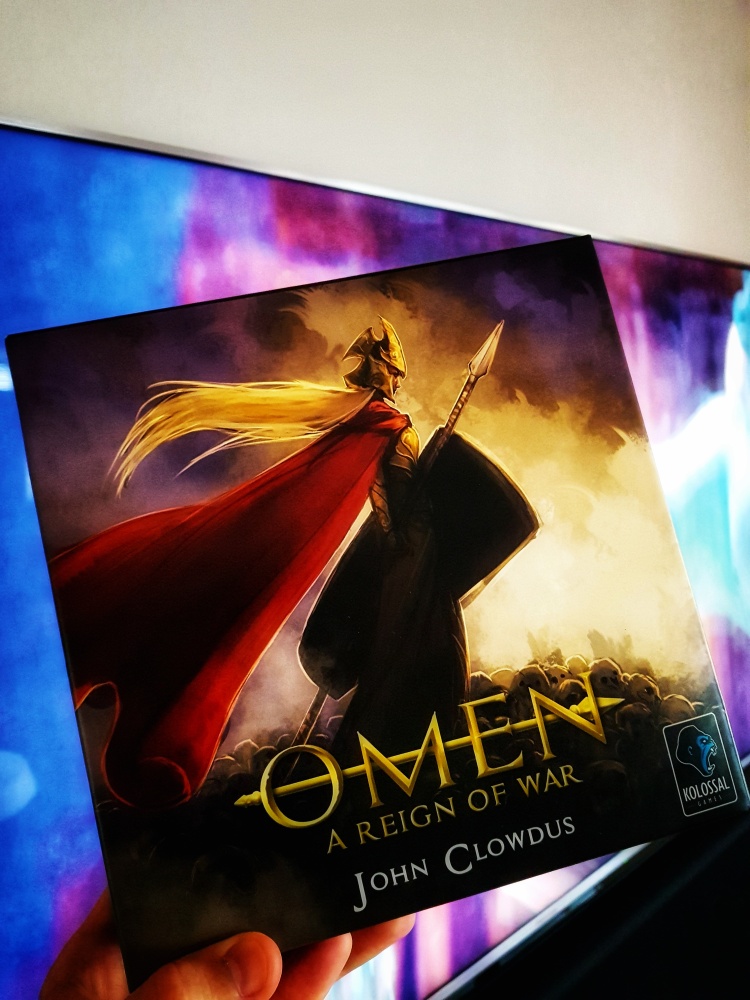 Go visit the Kickstarter page and if you liked our preview, please let us know in the comments below or on our Instagram, Twitter, Facebook or BGG accounts!

Your like, thumb or heart really matters, so please do so if we brought you any value through our content 🙂

Preview copy was provided by the fantastic folks behind Kolossal games, thanks Y’all!

This is such a great solo experience and a wonderful setting. Admittedly I don't often solo game anymore, so it's on the trade list (and just found a new home 🤭) but I am 100% sure it will be enjoyed! ☕ @homosapiens_lab @taiwanbgdesign
Had a great weekend with friends, the kids, some nice 🍷🥘 and board games! One of the favorites we played was Mini Rails from @moaideasgame and designed bij Mark Gerrits 🚂 The game is very streamlined but holds tons of decision space and cool ways to incorporate a lot of player interaction Cannot recommend this one enough if you like those thinky fillers where you need to pay attention on everybody's turn
Let's get down the 🐇 hole shall we ❔ In Wonderland Xiii, players become the librarians of the Dream's Library, whose goal is to collect from the Wonderland as many spirit cards as possible by exploiting the limited keys and spirit cards in their notebook. The artwork is quirky, a little naughty, but very cool. The game is best at three, so it isn't one we will keep, but it's a fun little card game. Go check it out www.pwud.ga if you want to know about this one 👌🏻