We love animals and we love hanging out in one of the many beautiful zoos which can be found around The Netherlands. There is always the moral discussion if animals should be locked away in cages, and we do think there is something to say they shouldn’t be so in some cases, but too many species are saved only because of being helped in there captivity instead of being out in the wild and being hunted on. Also the possibility to get to know the animals better, so the educational part of the equation is something especially the little ones always seem to appreciate.

So when Pablo and Tove from Worldshapers Boardgames reached out to us if we wanted to try a copy of Zoomaka (which you can buy here) we couldn’t say no. And even more special and frankly, heartwarming, this personal note. 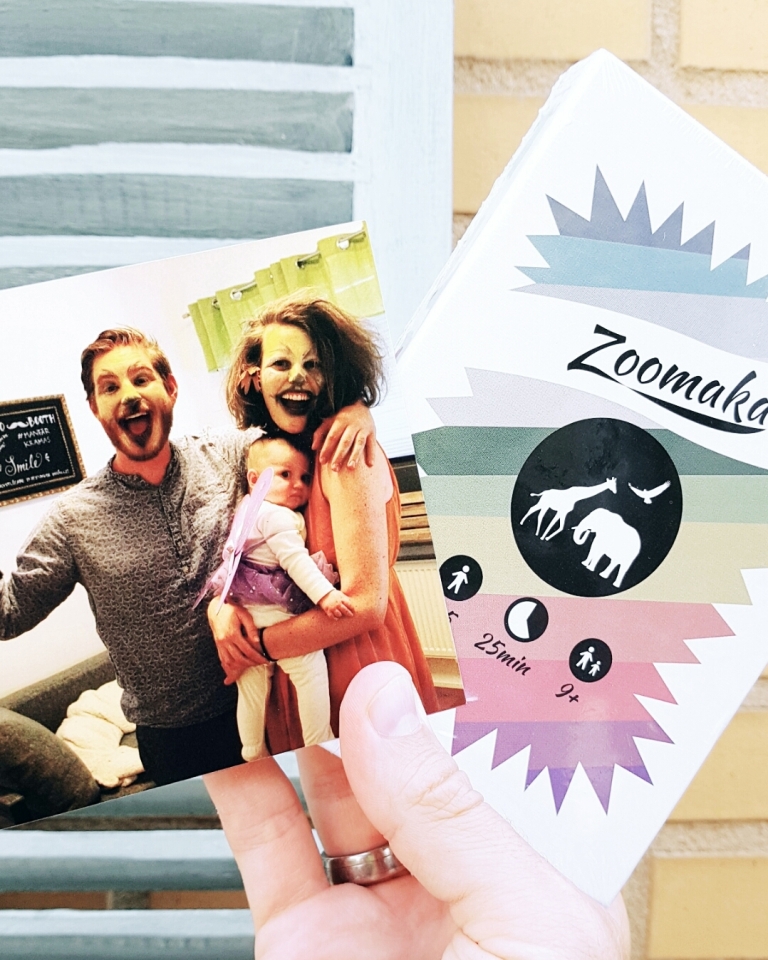 Join us for our Zoo making adventures and we will tell you what we think about this interactive and fast playing card game! And if that’s not inviting enough, there’s a Unicorn in here too!

If you ever wanted to become an entrepreneur and start your own Zoo, here is your chance. You will need to use some imagination in places, because there will only be a deck of cards available, to transport you into the world of Zoomaka. You will start collecting species and will be trying to put them together in different sections and try to open 4 of those before your competitors do. But as with every business model, you will need some cash at hand and will start asking entrance money as soon as you possibly can. With the stolen, or rightfully claimed assets, you can fill the bank or put the needed species you took of your competitor’s hands, at a far better place in the world, your side of the zoo! Only, there is a big but in the room (which isn’t the elephant) some of those pesky owners don’t want to coöperate with your plans and play dirty games like stealing your precious animals, pay entrance fees with peanuts or block you out in a whole. Gladly when all is down, there is a way to soften some setbacks, by playing a setting card you can add some wrinkles in the rules or give yourself some extra motivation to achieve your goals. A lot of the game is being smart about when you do what and trying to dodge those reaction cards, those can hurt you badly. 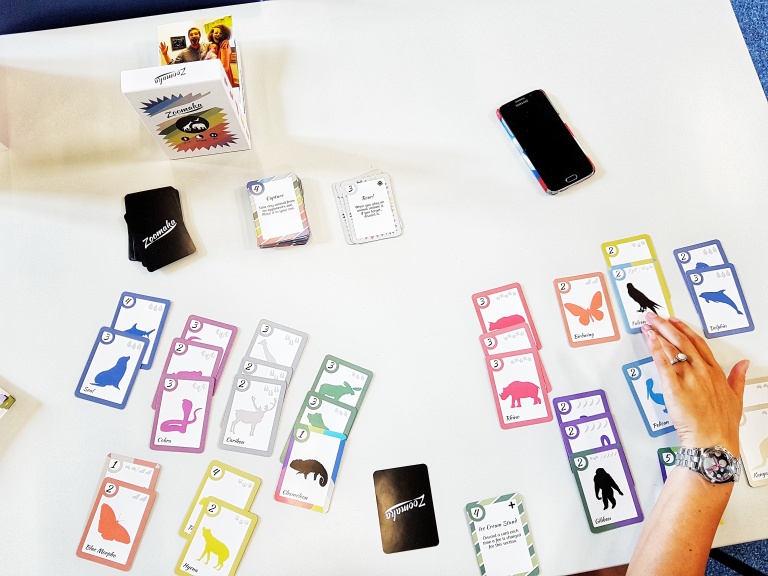 The flow of the game

The game is played over several rounds until one of the players has 4 sections which are filled with the correct amount of animals. The needed amount and the corresponding symbols are on the cards and there is a variety of animals, ranging from where you just need 2 of a given species or somewhere you will need 5 to get a herd. And like we said in the intro, there is a Unicorn, which is a section by itself.

You will start the game with 6 cards in hand and you will grab 2 when you finish your turn with at least still one card in your hand. If you are empty, you will take 6 fresh ones. 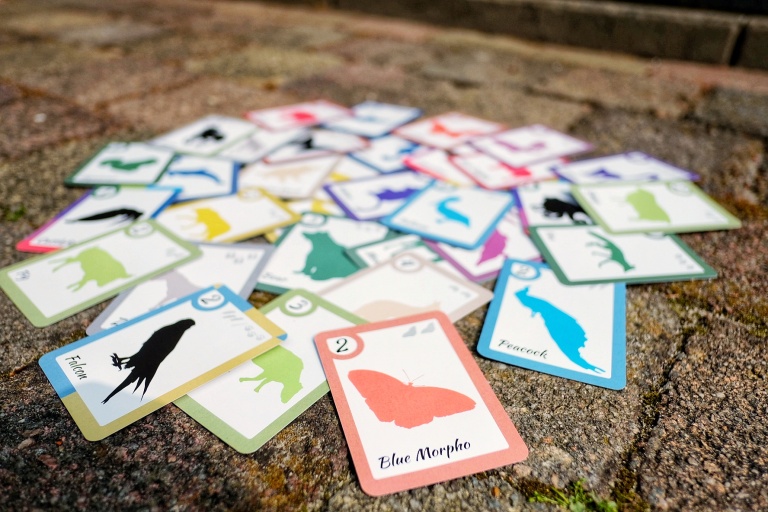 On your turn, you may do up to 3 actions, which can be the same or all different.

There is 2 other type of cards in the game which can be played for free.

And that’s really all there is to a game of Zoomaka. There are still some small minutiae which we left out, but the rambling above gives a good idea of what you are doing with all those cards in your hand and why.

As you may expect, there are only cards and they are made from a decent cardstock quality. It isn’t a linen finish, which we do like more for our cards, but it is fine and on par with what you will be paying. The black card backs do stand out against the very colorful fronts, but without sleeving, they will wear off in the long run. There is a silver lining though, this is some feedback we received from the publisher: ” I’m not sure there will be a future print of Zoomaka. But we are developing other games at the moment. One game revolving around growing chili and one that revolves around nomads and prophecies. For those games we would probably be able to add linen texture. We might however scale back on card size as that would make a smaller impact on the environment. We are trying to reduce our effect on the environment so the games, including Zoomaka are printed on environmentally friendly paper.“

The anatomy of the cards and the graphical design approach can be described as clean, clear and very solid. They really did think of their color use, making the borders different and it stands out very quickly too which of the different types of cards and animals it belongs. It is very clear when an animal can belong to more than 1 collection also.

The art style is very modern and simple, but we love that about it. It isn’t too much explosion of beautiful artwork like for example Evolution has and we like that too, but that can sometimes detract from the gameplay. This is clearly function over form, but not in a way where it is too much to one side or the other. 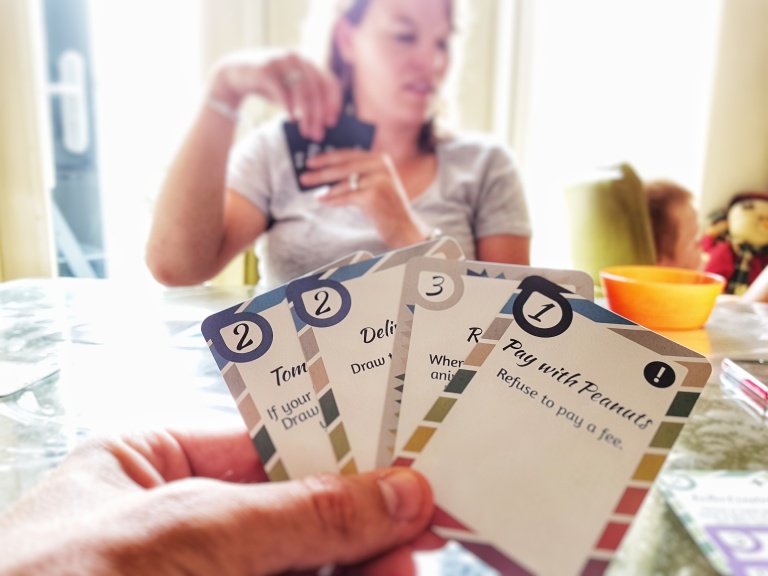 Now the question, can we do a toast on Zoomaka by Worldshapers?

Our Criteria (as always, very subjective)

Does it play well with 2?
It’s more direct as with more players. A lot of take-that actions are only beneficial against other players and with just one, it can be a lot. The plus side is, your counter cards are also just focussed on 1 player. But overall the game looks quite balanced and the amount of take-that cards versus counter cards is good. Sometimes, because you cycle slower through the deck, your card pulls can be a little frustrating, but that’s a minor thing. There are a lot of ways how you can increase the chances of getting what you want, just steal it, simple.

Does it suit one of our game groups or family (D&D, Heavy games, thematic games, etc.) Not sure about thematic players, those will see only the cards and less of a real setting. It’s far from a heavy game, it is medium-light at best, but may fill an in-between heavier game spot. It does keep your attention at the table, the situation changes a lot and your reaction (!) cards can be played out of turn also.

Does it come with a solo variant? No

How are theme and mechanics tied in together?
You really do collect sets of animals and most species which are available, are living in zoos around the world. But in the end, it’s a pure set collection card game with some nice colors and there isn’t a real feeling afterward where you have to build a beautiful zoo. Like for example, you do have a game like Unfair. But I, Marlon, hated the pushback from the game on certain situations there and would love to have such a game without too much random bad luck stuff.

Does my collection need this? What stands out?
(New mechanics? better integration of x? new theme? etc.) We love quick playing card games, which can be dragged along easily to places where we can combine games with other activities. We didn’t own an animal themed one yet and this one is filling that gap. We don’t know if it’s the best tit for tat card game out there and it is more on the social side, then on the strategy, but we are having a blast with it at the moment.

And how is the rsp?
For just a whooping 17 euro you and your gaming friends will have a blast building zoos and be taking each other by the nose in occasions. On the side, you support a wonderful board game-loving couple and help them to create even more of these amazingly fun titles. 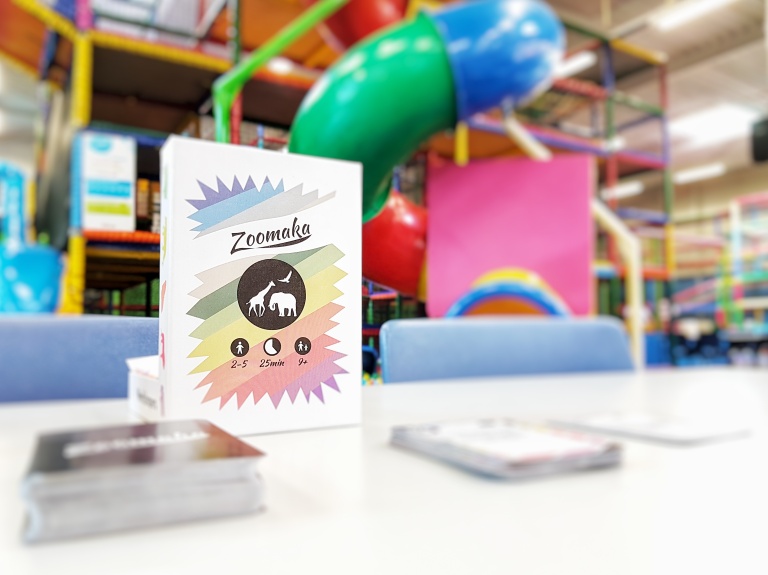 We ain’t gonna lie, the personal touch included by the creators, does help to enjoy and connect with someone’s else their dreams that few percents more. And we would be heartless if it doesn’t right? We have said it before and we will say it again, this hobby is so much more than just cardboard stuff we enjoy, it is the whole chain of people doing something in this industry. Is it from creator, publisher, content media channels or just those who enjoy playing the games, it is the human connecting on every level which is still the most important factor within it. Zoomaka is something where you feel there is passion behind it.

Is it perfect? No, it isn’t. There could have been more elaborated artwork, there could have been used better cardstock and we would have liked it to have a little more strategic possibilities to it. But who cares in the end? This game is highly enjoyable, it looks very 2018, it comes from people who love their creation intensely and we will choose that any day over any overproduced and forgettable title where it is purely based on popular IP or a longlasting milk cow principle. You all know which titles we are referring too.

We honestly hope you will give this game a fair chance and we will promise you, you will have a blast with it for just a few bucks and you will have a chance to finally own a Unicorn? Come one, that’s worth the experience alone!

Let us know in the comments below what you think of the game or if you have any questions. We thank you so much for reading and please don’t forget to like, share or comment. It really does make a difference and you will help us