What have we played across the month and what is worth mentioning? We will tell you and we also give our initial feeling on our experiences with the games?

What a game The Mind is and we are still flabbergasted why this got us hooked as much as it does! We already did a crossword review on it here, but we cannot stop pulling this one out and try to crush those 12 levels. It can be so hard, but also so satisfying at the same moment. You will never know how intense people can stare at you until you have played this one.

At long last, we received our first wave copy of this beast of a Kickstarter board game, Lords of Hellas by Awaken Realms. The expansions are coming at the end of the year, but we don’t need more yet. There is so much going on in this epic Greek Gods meets future technologies megamix. It’s a strange cocktail of themes, but for us, it works brilliantly. Another genuine theme would not have set this apart from the masses. But it isn’t just the theme alone, the gameplay is solid as a brick too. Quests, hunts, area control, working together, backstabbing, there’s so much going on. Again, the mix of different influences here is reminding us of games like Kemet, Cry Havoc, Blood Rage and more. Is that a bad thing? Hell no! I played a 4-hour session with the guys from the Epic Game Day The Hague and we had a total blast with it. The miniatures look fantastic, and we cannot wait to see what Martijn will do with his copy. We need to play this soon and more and often and always! Really need to get this played with Erna too soon, let’s make war and not love! 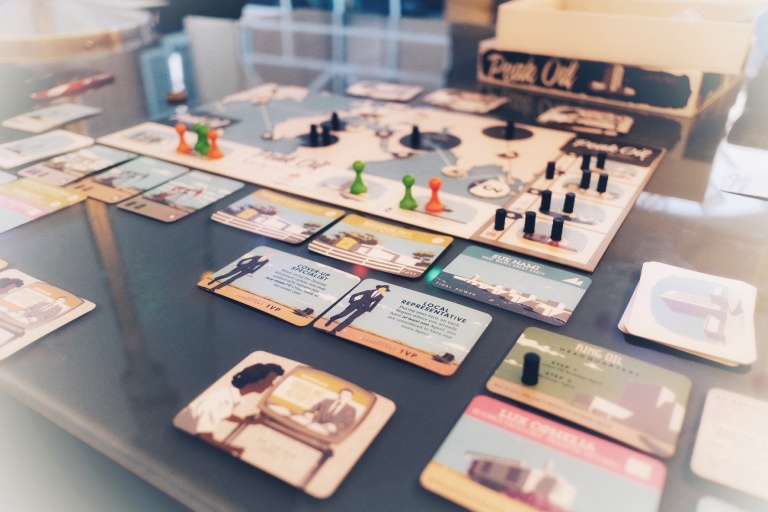 A belated board gameplay from a game we received at Spiel 2017, Peak Oil, finally we have got it to the table. And we can say that we wasted far too long before playing this. It is published by the Spanish publisher 2Tomatoes and spiced up by the wonderful art of Heiko Gunther. We will be releasing our full thoughts on the game soon, it’s already in draft version, so keep your eye on the blog for it soon! It’s a wonderful set collection meets action spot majority based oil themed game. You will try and invest in the future tech and make that as valuable as possible. By drilling around the world, you will put black barrels all around the game, which have a different function where they are on the board. But, be aware, it’s very player interactive and much shorter then you may expect. Lovely game! 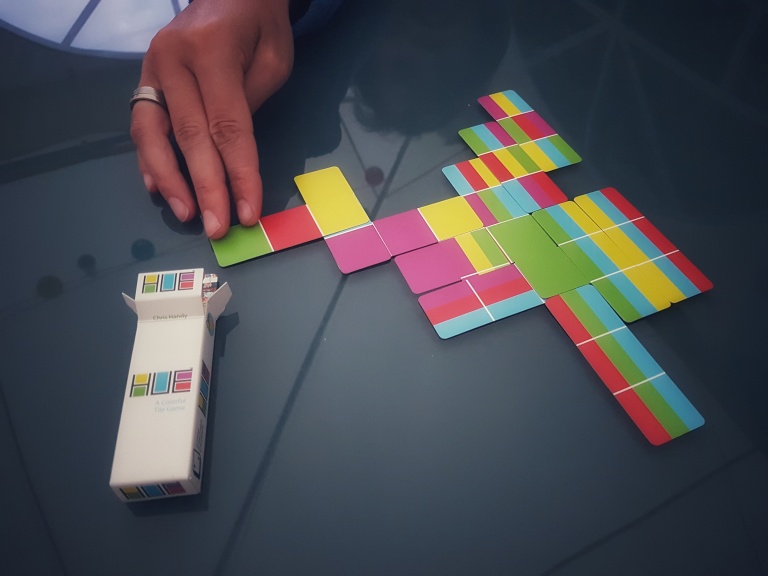 We needed an extra game to make it across the free shipping amount, so we picked up one of the Packogames from Perplext, HUE. As most will know, these tiny games are ideal travel companions and make even for some fun weeknight gaming when the time is very limited. Hue is all about connecting colors and scoring your last card, which holds 3 colors. The longest adjacent color will be scored. Fun little abstract game and a fantastic niche they have found with these titles. Any others you can recommend?

To be fairly honest, my mind was still at the Lords of Hellas game I just finished and I wasn’t grasping Orcquest by Maze Games immediately. It’s all about slamming cards to the table at the right time, getting in (or out) of fights and trying to gain the most loot or get your fellow Orcs killed. There are a bunch of cards and from what I saw, a massive variety of effects through a bunch of expansions. The ways to screw over your opponents are endless. The art is so good in this and it is of course one which has that Heroquest copy box cover. I only played it once and I really need to play this one again to say if this is something I may like more with more plays. Don’t think this is in anyway a game Erna will enjoy though, from that I am sure.

Can we say this? Yes, we can, it’s our own blog, so let’s say it. This instant classic dice game from Renegade Games, which is designed by one of our favorite designers, Kane Klenko, is always such a blast to get to the table again. In just 10 minutes you will experience the pressure of being blown to pieces if you do not solve the needed amount of bombs to escape that dreaded vessel. It’s so simple, roll the amount of dice that there are players and everybody needs to take just one. But the choices, the decisions, and the frantic communication is hilarious and always keeps you coming back for more. It is one of our favorite filler and social games out there and we really should try Flatline, the sequel of Fuse, someday.