So we entered day two of the convention at the Messe Essen for the Internationale Spieltage Spiel. Today is a day filled with a lot of cool things like the full Kickstarter demo game of Jordan Draper’s Tokyo Tsukiji Market together with Root designer Cole Wehrle, The traditional Heavy Cardboard Meet-up with an emotional Edward speech at Fitzpatrick and some enjoyable interviews with Eilif from Aporta Games, Clay from Capstone Games and designer Wei Cheng-Cheng with his Mini WWII board game published by Formosa Force Games!

Truth be told, I did start off a little slow today, because of the adventures at the night before. But, as is common at these hectic days at Spiel, I continue on with a lot of positive energy and after a big breakfast, let’s crush some more spiel fun.

One of the people I got to know a little over the last few years, is Clay Ross from the American board game label, Capstone Games. It’s always such a pleasure to spend time with him. What was even cooler, he brought along his dad, who was running the booth with him. I did a short interview with him a while back to get to known him a little better. They had The Estates out, which is just a fantastic brutal auction game and they were demoing the currently live on Kickstarter game, Pipeline. From the demo and the Heavy Cardboard play-through I saw, this one looks really good! And how about The Climbers? If you haven’t seen it, here our thoughts on that Simply Complex game from Holger Lanz

Now it was time for my planned demo game with Jordan Draper for his newest release coming to Kickstarter this January, Tokyo Tsukiji Market. As a surprise to me, Cole Wehrle joined in on this full play demo, so of course, I was a little starstruck. We played a full four-player demo in about 90 minutes, with Jordan destroying us. But I must say, the game is highly enjoyable and has very player driven core to it. You will never have the same game twice and this is one of those systems which will require players to really stay engaged the whole way. As always, the prototype already looks great and Jordan goes over the top in his production on the little eels, the fish markets, and the wonderful chunky money bits.

The game is quite a heavyweight one, but it does leave room for playing with your gut too. And in fact, that’s a positive thing too, a good market based economic game, should have that in my humble opinion. Just dry number crunching is not what I enjoy doing. The meta game is fun here too, where you can talk other player’s into buying your too expensive priced fishes and play out the poor player card can be beneficial in the long run. All in all this was really one of the most memorable experiences from Spiel 2018 for me personally and I want to thank Jordan again for this.

From the Capstone booth, it was a short walk to the Aporta Games one, where I finally got to meet the amazing folks behind that publishing house. Well, Eilif, in this case, and we had a wonderful chat about the new releases from them. (Trollfjord, Santa Maria American Kingdoms & Rebel Nox ) As we are huge fans of Santa Maria from last year’s Spiel, we couldn’t wait to try out all the modules from the new expansion, American Kingdoms! Soon more on these on the blog.

And well, to keep it logistically efficient,  I had to see the designer, Wei Cheng-Cheng, of one of my most anticipated games from the convention, Mini WWII. He designed this game with the intention to get to play a war game with his son. But he didn’t want that 3+ hour experience, plus a lot of rules, but he wanted an accessible game which also teaches the broad impact World War II had on our societies. He did a masterful job with that! It stays a game, it organically leads to understanding some of the big scenes which happened during those times, but it doesn’t turn into a mere simulation.

With a trip full of highlights, there’s always also that less than ideal experience. Like I always preach and have written in our policy, we give you our honest feedback on games and give you our whole board game life, well this was my least favorite moment of the fair. Sometimes, when meeting up with somebody, you know that feeling that you are just less “into the groove”? You maybe didn’t eat enough, or you didn’t hydrate enough water at the Halls (so important folks!) or are tired from the long day. Sadly for some reason that happened with my meet at WizKids with Zev this year. I totally blanked out, had nothing to really add for them and just failed the whole scene. I am still so sorry for that, Zev and I hope in the future I come more prepared. I did receive a nice review copy of Maidens Quest (Just 20$ on Amazon!), which is one of my most played games since Spiel! It plays solo, or with 2 players, and depicts Maiden’s who are just tired of waiting for their saviors and go out save themselves! You can play this out of the hand and basically anywhere. Pick a Maiden, Pick an enemy, seed the deck and have a go at fighting or escaping your story! You can play a few rounds or go through the whole adventure, it’s all up to you. This is such a clever design, with the rotating of the cards when hurt or when you are upgrading cards and the way your deck evolves throughout the game. Call me very happy about this one and if you like clever little card games, this one won’t disappoint. One pickle though, the rule book is not the best out there, but it’s worth getting through that hurdle and give this one a try.

What better way to get rid of this experience, then by joining some of my board game friends at the Heavy Cardboard meet-up 2018. I honestly forgot to take some pictures there, because I was just too much into having great talks with all those wonderful souls. Like my Guinness buddies Alexander Huemer (designer of Lignum and I now FINALLY have a signed copy of it!) & Harald or finally meeting Ross (from Moregameplease) in real life. Or chatting with Jon (Jon Gets Games), Mara (canibeblue) and the No Pun Included couple Efke & Elaine. I do have one epic story to share though, which is followed by a picture and that is, when you give out a prestigious award at your meeting, what’s the number one priority? Bring the AWARD with you. Guess what Edward & Jess did not bring after a hectic day at the Messe? Exactly, not the award. As a good friend would do, I accompanied Jess (finally could hang out with her and chat for a few minutes after our crazy adventures from last year!) back to Messe in the pouring rain and found out a second important lesson, have a key to the closed booth. Let’s say this, we couldn’t get back without the Golden Elephant Award. So a thing happened but got neatly resolved after the fact, but we had a successful trip! Finally, Vital Lacerda, Ian O’Toole, and Paul could receive their award for Lisboa, as that was the Golden Elephant Award winner of 2017. After many more beers, even more great discussions about a whole variety of topics, I went straight to my room to crash after another fantastic day at Essen. 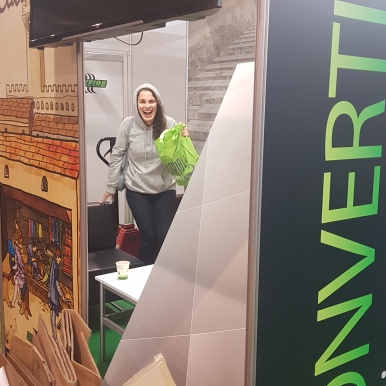 Now let’s get to the board game photo’s shall we? All that rambling Marlon, we are here for the shiny and the glitter! SHOW US! Well, much obliged, enjoy them again and let me know if you have any favorites among them.

End of another fantastic day!

Thanks again for dropping by and sticking all the way to the end. I hope you liked it and if so, don’t be shy and like this post or share it with other board game friends.